Skip to content
Free Shipping on Orders over $54.99!
Welcom to MonumentGrills
Close Please hurry! Only 82 left in stock
It is the product factory model name

You can find all replacement parts with the model name on MonumentGrills.com.

Free standard shipping on orders over $54.99

Estimated to be delivered in 3-5 Days.

😃We know you want your Monument grills in tip-top shape and outfitted with the latest Monument grilling gear. That's why we treat every order with special attention and make sure we process it as quickly as possible. If you have any questions please call Monument Customer Service at 1-800-530-9133.

✈️Monument Grills offers free shipping and ships online orders within the continental U.S. We do not ship to Hawaii, Alaska, and P.O. Boxes.

😝Orders with multiple items may be shipped in separate packages to speed delivery. You will not be charged for additional shipping and will receive separate shipping confirmation e-mails.

👋Login to your MonumentGrills account on Monumentgrills.com, where you can check the status of your order, track the delivery, and look up your order history.

MonumentGrills provides a straightforward, hassle-free warranty to save you some headaches.

All products come with their unique warranty that you can find on the product warranty page or contact us at customerservice@monumentgrills.com with your order receipt for confirmation.

We'll Always be There for You.

If you have any questions or concerns, feel free to contact us at customerservice@monumentgrills.com.

Let me start by saying this is second Monument Grill I have purchased. It is a very functional and versitle grill. I purchased the second one online unassembled. The grill was fairly easy to put together, however it had a manufacturing defect. The side burner assembly was incorrectly assemble at the factory, the hole in the stainless steel where the wires from the LED attach to the body of the grill was not there. I attempted to drill a hole, don’t try, even with a cobalt bit. Anyway I call Monument about the problem and they sent me part of the solution, but it was not complete, missing the knob escutcheon. I called Monument again, after verifying what they sent earlier, The correct part was delivered within two days. On another note I was able to use the grill without the side burner. Even though this was a hassle and an incovienece the customer support from Monument was exceptional. I would purchase this grill again, just maybe assembled next time. 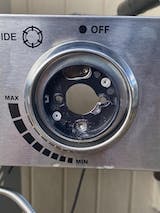 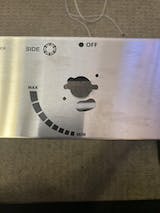 This email has been registered!

Back In Stock Notification